All possible futures. Why should you speak out loud about your dreams?

The narratives of popular culture that surround us fuel fears and dazzle with images of dystopia. In the conditions of a constant state of emergency and in the face of the specter of a climate catastrophe, it is more and more difficult to dream freely and build new visions of getting out of the impasse.

British cultural theorist Mark Fisher called this phenomenon a crisis of the imagination. Design plays a key role in building a vision of change. As a field, it is a bridge between technological research and innovation and their social application. Designers can be found in all industries and fields, but their potential is still not properly used (according to the Design Council report). Design itself is not the answer to big problems. However, it provides valuable tools with which we can stimulate the imagination and make the effort to create new narratives.

We need to exercise our ability to critically examine the stories around us and be alert to how they affect our image of the future. It is worth looking for less popular texts and creating your own – because only in this way we have a chance to break the deadlock and routine.

Perhaps our future does not have to be a duplication of repeated visions from Blade Runner to Black Mirror to Cyberpunk. What if, as Zach Mandeville describes, it was technical but also optimistic?

During the lecture, Katarzyna Janota will talk about Solarpunk and other futuristic-optimistic movements telling about possible futures. Solarpunk is a movement in speculative fantasy, art, fashion and activism, looking for an answer to the question of a vision and ways to build a sustainable civilization. Its extremely important aspect is aesthetics, about which one of the main representatives, Jay Springett, says that "it combines practicality with beauty, good design with green and wildness, and brightness and color with what is earthy and solid."
Together, we will consider how important it is to search for new narratives and redefine the role of people involved in design. We will try to answer the question of what possibilities are offered by design methods to exercise the imagination and build new narratives. The speaker will also share her experiences gained during speculative workshops and projects carried out as part of the Working Group collective and the Minimum Viable Utopia community. The lecture will refer to the new Design Council publication: "Beyond Net Zero". 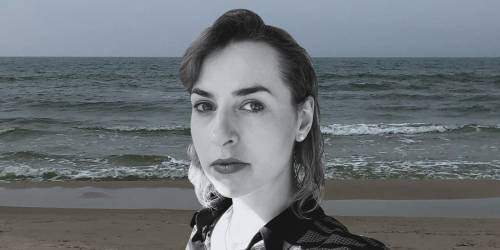 Consultant and designer of digital products. He teaches design at SWPS, the Faculty of Humanities of AGH and WSE. At the Academy of Fine Arts in Katowice, he co-creates the program of the Social Design course. Co-founder of the collective grupa.robocza.org. Enthusiast of the design studio method and broadly understood participatory design.