Ghost Nets – from waste to wear

Fishing nets which, as a result of an unfortunate accident, broke off and drifted freely into the sea depths are called "ghost nets". Lost fishing equipment is statistically only 1% of boat equipment.

Seemingly not much, but estimates says that over 640,000 tons of lost equipment are drifting around in the ocean. You need 6,100 blue whales on the other side of the scale to get the balance right. What's worse, modern fishing nets are made of plastic, which makes them incredibly strong and resistant to natural decay. Therefore, they persist in the water for many years and pose a long-term threat to marine ecosystems.

Why are ghost nets so dangerous? Aquatic creatures unknowingly swim into freely drifting nets, from where there is no escape route for them. Predators, tempted by the easy prey of trapped fish, become next victims of the death trap. This cycle repeats itself many times, killing hundreds of marine inhabitants. Ghost nets also pose a threat to divers who fall into a tangle of plastic during expeditions. Their presence is harmful even for the inhabitants of the land. As time goes on, nets break down into smaller and smaller pieces. Small elements degrades into microplastic, which is widely consumed by marine organisms and incorporated into the trophic chain- don’t forget tha we, humans, stand at the end of it. Therefore the materials we pump into the environment return to us as waste or as hard-to-detect microplastics, creating a vicious circle effect.

Exhibition presents the activities of the Ghost Diving Poland Association, which, together with the Healthy Seas organization, cleans up the seas and oceans from abandoned ghost nets with the help of volunteer divers. We would like to draw attention to the life cycle of the network – waste extracted from the sea cannot simply change the place of disposal.

In line with the idea of a circular economy, it can be recycled many times as it is a useful resource. Fishnets, along with other nylon debris, that would otherwise pollute the Earth and kill marine life, are transformed into reclaimed ECONYL® nylon. It is exactly the same as brand new nylon and can be recycled, reconstructed and remoulded multiple times. Nylon created from lost nets – ECONYL® – is perfect for the production of functional clothing, car rugs, carpets, bathing suits or sunglasses.

See, touch and feel this material at every stage of its journey from waste to useful item.

The exhibition was created in cooperation with the Experyment Science Center and the Ghost Diving foundation. 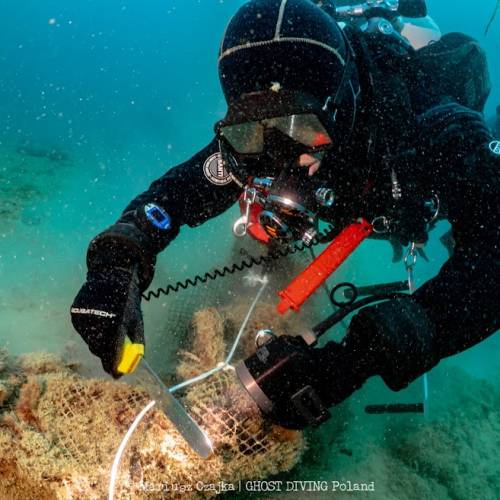 Ghost Diving – get to know the diver | DAY II